Free Culinary School or Bartender School. Choose your job in your new Culinary or Hospitality career.

Visuals to be available: Footage of staff preparing and packaging meals

Los Angeles, CA: The “Serving Our Community” program will serve its TWO MILLIONTH meal this week to homebound seniors, homeless persons and low-income families impacted by COVID-19 through contactless delivery.

This partnership between Hospitality Training Academy and UNITE HERE Local 11 launched on May 1st, 2020 and has since served over 9,296 persons with meals cooked in the industrial kitchens at Levy Restaurants at the Los Angeles Convention Center, Pomona College, JW Marriott Los Angeles LA LIVE, The Westin Bonaventure Hotel & Suites, Sheraton Park Hotel at the Anaheim Resort, Sheraton Grand Los Angeles, and The Beverly Hilton Hotel & Resorts.

The Hospitality Training Academy ensures that all meals meet City and County dietary requirements, and all workers receive COVID-19 training (safety and sanitation). SOC addresses three urgent needs facing stakeholders in cities across the country: employing laid-off, out-of-work, trained and experienced professionals; ensuring continuity of service at keystone employers that are a fiscal engine in our region; and providing meals to at-risk populations.

Serving Our Community is an initiative launched by the Hospitality Training Academy (HTA), UNITE HERE Local 11, the hospitality workers’ union, and many of its employers (partnered hotels and event venues). The HTA and UNITE HERE Local 11 partnership received a Master Service Contract with the State of California for Los Angeles County, Orange County, and San
Bernardino County.

UNITE HERE Local 11 is a labor union representing over 32,500 hospitality workers in Southern California and Arizona who work in hotels, restaurants, universities, convention centers and airports.

Mayor Eric Garcetti announced at a press conference that the City of Los Angeles has contracted with the Serving Our Community initiative.

Link to video of Serving our Community: https://drive.google.com/drive/folders/14UMpfFzA_zUCGPsR7BQizbL-GJBtZb5F?usp=sharing

Link to photo of Serving our Community: https://drive.google.com/drive/folders/12NbxEJAlwOM-NDKJ_HNR4KjFwzJwANof?usp=sharing

LOS ANGELES, California – The Hospitality Training Academy (HTA) was proud to announce and the grand opening of its new state-of-the-art Culinary Training Facility. To celebrate, HTA hosted Ribbon Cutting and Community Buffet event on May 7, 2019. The HTA is proud to expand the reach of its programs through this new, fully equipped kitchen facility that will allow it to provide the most up-to-date, industry-recognized training to a broader and more diverse population due to its centralized location at the heart of Koreatown.

The celebration also marked the culmination of the HTA’s first Culinary Apprenticeship cohort at this Koreatown facility. The HTA Culinary Apprenticeship is an intensive 7-week training program registered with both the U.S. Department of Labor (DOL) and State of California Division of Apprenticeship Standards (DAS). After completing the training, participants will move on to work as apprentices and workers, as Line Cooks, at one of HTA’s 160 union employer-partners including luxury hotels and concessions at the Los Angeles International Airport (LAX). The students prepared a buffet for the celebration to break bread with its 145 elected officials, guests and community partners.

About the Hospitality Training Academy

The Hospitality Training Academy provides job training and placement services to who are underserved and underrepresented in the hospitality industry, in partnership with UNITE HERE Local 11 and its 160 union employer-partners in order to support them through a path to gainful employment. The HTA is a 501(c)(3) non-profit organization, a Taft-Hartley labor-management partnership, and the recipient of private foundation, and Federal, State, and local grants that allow it to do this work to serve Angelenos with barriers to employment and connect them to good, union jobs.

Could the future of Fairplex involve horses, cars and job opportunities?

POMONA >> Horses and fast cars have long been part of the history of Fairplex.

Automotive “trials of speed” were on the mind of the founders of the L.A. County Fair and were written into the Los Angeles County Fair Association’s articles of incorporation, said Dale Coleman, vice president of sales and creative programing at Fairplex.

Horses and various equine activities have also been closely connected to Fairplex for decades and those who have long been involved in some aspect of breeding, training, showing or owning horses said recently the animals deserve to have a greater presence at Fairplex.

Both matters were among four topics discussed Thursday during two brainstorming sessions at the Sheraton Fairplex Conference Center. The sessions are part of the Fair Association’s strategic planning process, an exercise designed to help craft a vision for the future of Fairplex. Crafting the vision comes as the 100th anniversary of the first L.A. County Fair approaches.

When it comes to horses, Fairplex is a place that is well suited for equine programs and activities, said Scott Dunn, a member of Cal Poly Pomona President’s Arabian Advisory Committee.

Over the years, Fairplex moved away from some horse activities, but they can be brought back, he said.

“Why not have a world class horse show facility?” Dunn asked.

California has the second largest horse population in the country, he said. Members of the public, particularly parents, are looking for wholesome activities to take part in as a family. If Fairplex increased its equine shows, families will turn out, Dunn said.

“You bring every major breed and discipline and show Southern California what horses are about,” he said.

Dr. Babak Faramarzi, a veterinary surgeon on the faculty of Western University of Health Sciences College of Veterinary Medicine said the potential exists to create partnerships between the University’s veterinary program and Fairplex.

Equine programs and activities could be a source of revenue, but “it’s not only about money, it’s about the future,” Faramarzi said.

Working with horses provides opportunities for many people outside of veterinary medicine students, he said.

Young people who work with horses will find a path that leads them away from negative behavior and exposes them to career and vocational opportunities they may not have considered, Faramarzi said.

Horses have a place in the future of Fairplex, said Miguel Santana, president and chief executive officer of the Los Angeles County Fair Association, after the brainstorming sessions.

“The question is in what way,” Santana said.

When it comes to horse racing, the question that has to be asked is what is the general population’s interest in such a sport, he said.

That’s because “you don’t have to come to the venue to wager,” he said.

Still, in general, have “been a part of our history and we want it to be part of Fairplex’s future,” Santana said.

Automotive sports, in its many forms, have been part of Fairplex for many decades.

Fairplex personnel created a video using film footage and photographs that gave a history of automotive sports and Fairplex’s connection to the automobile.

Stock car racing and youth drag racing were once held on the Fairplex grounds. Professional racing, such as the National Hot Rod Association Winternationals, have been and continue to be an integral part of Fairplex.

Through the Wally Parks NHRA Motorsports Museum the history of the sport is showcased at Fairplex.

But beyond that, Fairplex is also a place where car enthusiasts can show others how they can turn an old car into automotive art.

Fairplex is also a place where teens and young adults can acquire or bolster skills at one of many Fairplex-based educational programs such as the Alex Xydias Center for Automotive Arts at Fairplex. The skills can give youth an edge when they enter the job market.

They are also the skills of a craftsman.

“Craftsmanship is a lot of different things,” said Kathy Wadham, director of creative programing at Fairplex. Craftsmanship could mean inventing something, but “it could be about taking a car apart and putting it back together,” she said.

Craftsmanship can involve the culinary arts or jewelry making, and it can earn someone a blue ribbon at the Fair or it can lead to entrepreneurial opportunities.

Job opportunities and developing the workforce is something that is also part of Fairplex, said Holly Reynolds, interim director of The Learning Centers at Fairplex.

Programs such a the Career and Technical Education Center, or CTEC, and Fairplex’s partnerships with local school districts and the San Antonio Regional Occupational Program give young people a way to acquire skills that lead to well paid jobs and career pathways, she said.

Fairplex also has worked with union organizations for years and works with more than nine different labor groups, Reynolds said.

Francis Engler is a board member of the Hospitality Training Academy and director of Unite Here!, a labor union that represents workers from various industries including hotels, casinos, stadiums, food service and apparel factories.

People who go through the training leave with skills and “land in jobs that change lives,” he said.

Among those attending the brainstorming session was Pomona City Councilman Robert Torres who said he was pleased to see the participation of organized labor in the session.

He added that when Fairplex finds itself looking to fill job openings it should think of local residents.

“There has to be a local hiring component,” Torres said.

Pomona resident Joshua Swodeck said Fairplex should consider integrating the arts into some of its programs. The arts can lead to the development of additional jobs skills that can help people when they need to move into a different occupation.

“When the economy shifts, lots of people have a hard time making a shift,” he said.

Others suggested building relationships with various educational institutions that will lead to job training opportunities.

Some suggested creating makerspace, places where people can access tools and other equipment where they can take ideas and designs and turn them into prototypes for products.

Fairplex can be a place where people find a career.

“I think the most important message we heard is people need more than a job. They are looking for a career,” Santana said.

Fairplex, Santana said, may be able to assist those starting out as entrepreneurs by providing space where they can have use of a desk, office equipment and meeting space for a business meeting instead of having to pay for an office and office equipment.

Having such a space makes it easier for someone starting a business to control costs but have resources needed to do their job, Santana said.

In a historic collaboration, LA’s Hospitality Training Academy (HTA) has teamed with UNITE HERE Local 11, the hospitality worker’s union, and management of the soon-to-open InterContinental Hotel in Downtown Los Angeles to meet and hire prospective staff. Seeing this level of outreach in the community was inspiring. The hotel plans to hire at least 550 union jobs with healthcare, pensions and other benefits. The new 900-room hotel will be the largest InterContinental in the Americas. 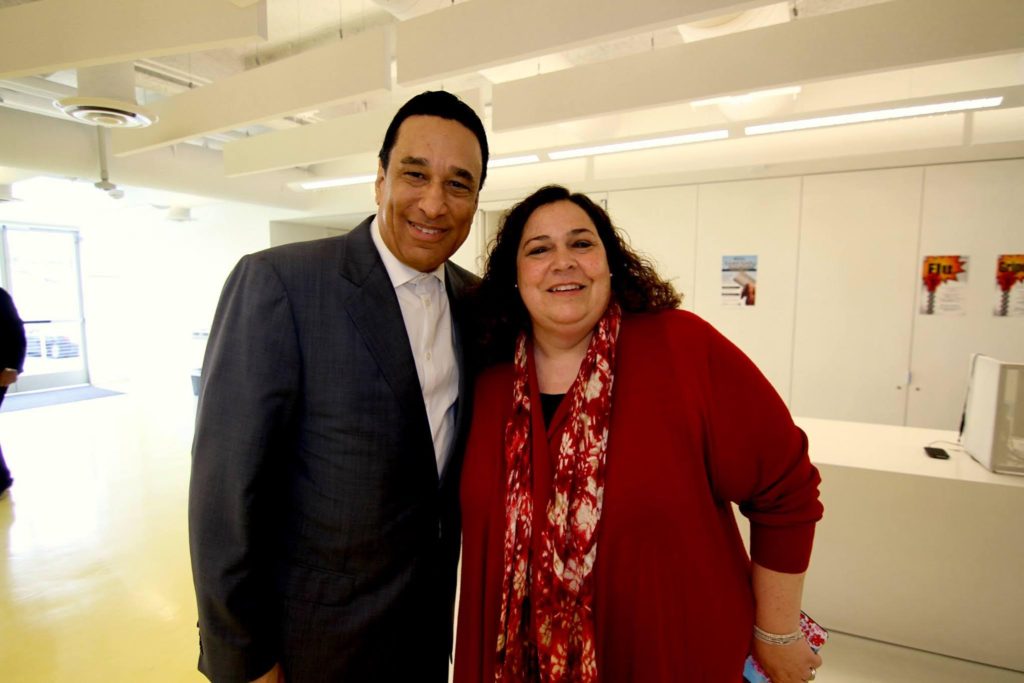 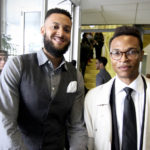 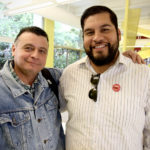 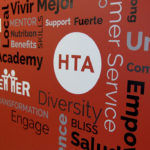 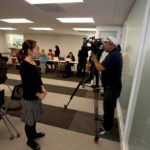 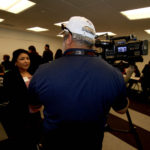 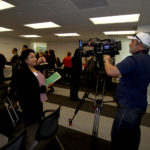 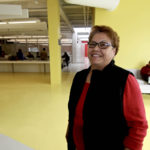 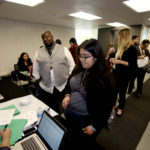 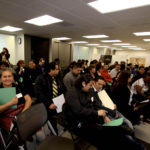 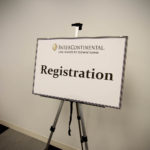 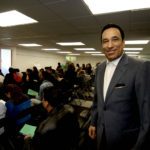 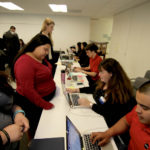 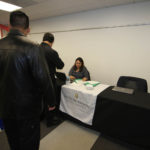 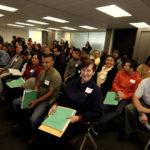 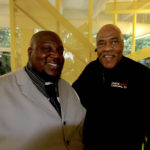 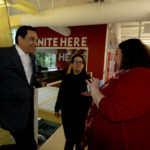 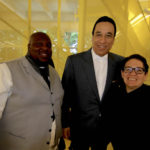 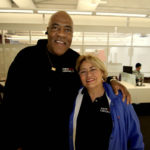 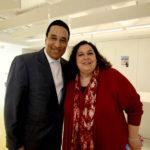 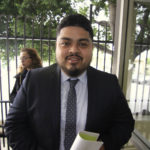 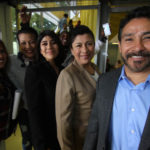 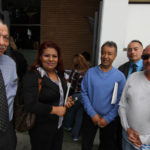 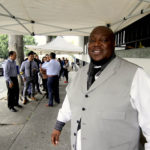 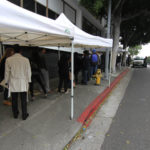 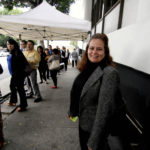 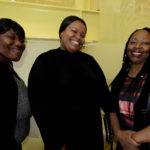 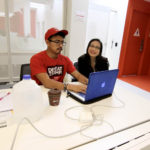 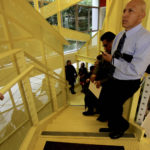 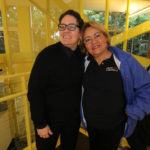