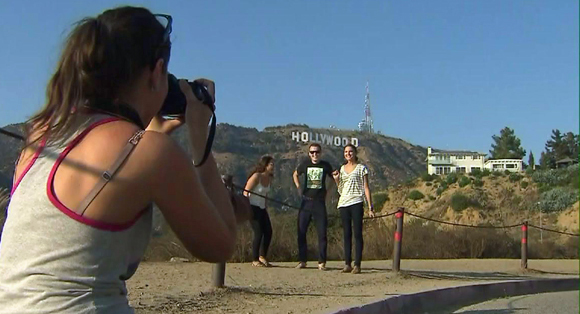 Tourists snap pictures near the Hollywood sign. (KTLA-TV)By Hugo Martin
March 11, 2013, 11:31 a.m.
A bright spot in the local economy — tourism — continues to generate big numbers for the region’s beleaguered businesses.Tourists spent $16.4 billion in 2012, most of it on hotels and restaurants, according to a study commissioned by the Los Angeles Tourism & Convention Board. By comparison, the agency said, tourists spent $15.4 billion in 2011.

The impact of the spending is nearly doubled to $30.5 billion because of what economists call the “multiplier effect,” which represents how spending promotes more spending by business bolstered by the tourism growth.

Of the tourists visiting L.A. County, 85% were from the U.S. and 15% were from foreign countries. China became the nation’s top overseas market for the first time, with 460,000 visitors last year, the study said.

Chinese visitors spend an average of $2,652 per visit, more than twice the amount spent by all overseas visitors, according to federal studies.