Here’s the story of how a union helped a company 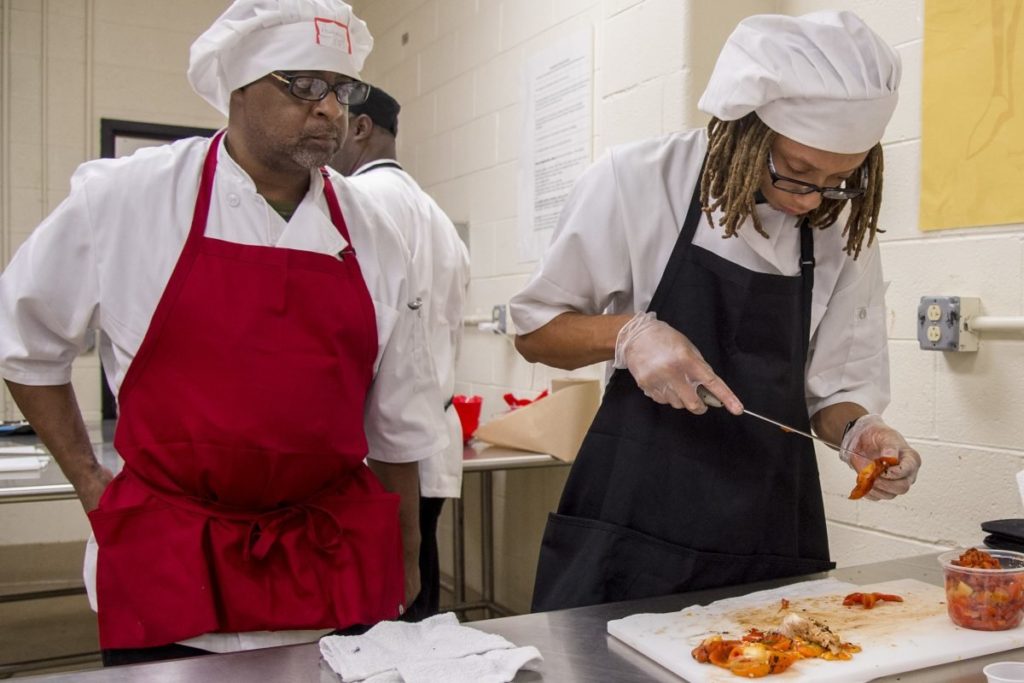 Here’s the story of how a union helped a company

Lots loaded onto that sandwich.

“To me, it’s a new start,” Roundtree said this week. As a teenager, he got into trouble. As a young father-to-be, he wants a career built on his passion for cooking. “It’s fun. It tastes good, and it keeps me occupied.” 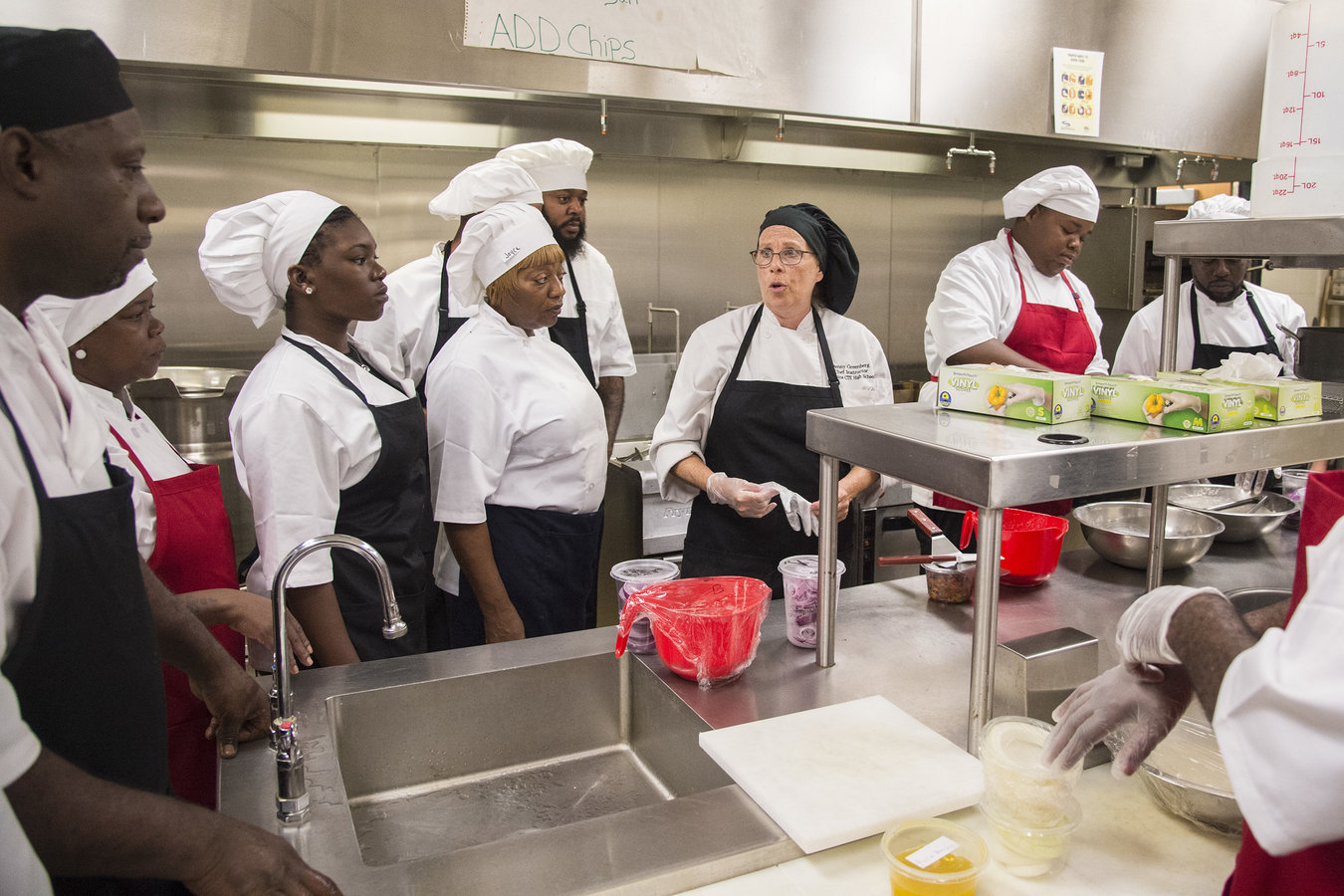 Wearing a black cap, Penny Greenberg, 62, the head of the culinary program at Dobbins Career and Technical Education High School, conducts a training program sponsored by hospitality union Unite Here as students gather around the stove.

On Tuesday, 75 graduates of the first class of the Unite Here Philadelphia Hospitality Academy will be honored at City Hall. Students range in age and capability from recent high school graduates such as Roundtree, a novice, to longtime chef and manager Anthony Cunningham, 53, who was laid off from his job at a Japanese restaurant in June.
“I’ve put in resumes, but I can’t afford to wait for a vacancy,” Cunningham said.

“The nice thing about this project is that it’s really employer-demand driven,” said Patrick Clancy, chief executive of Philadelphia Works, the quasi-government organization that distributes government and private workforce-development dollars. Philadelphia Works provided $48,000 from a Walmart Foundation grant to underwrite the $65,000 program, with $5,000 from from the union’s newly organized employer/worker joint training fund.

The $65,000 covered instructors, professional knives for the chefs-in-training, textbooks, even the beer needed for the beer-battered fried onion rings that Roundtree and his classmates cooked Tuesday. It also covered fees for three industry certifications: ServSafe for hygienic food handling and two others for alcohol. The students were not paid, but they will have the certificates, which could easily cost $150 or more to obtain on their own.

Unlike many training programs, which don’t lead directly to jobs, “this investment yielded jobs directly for the people,” Clancy said. “They’ll go to work, they’ll be part of the union, and they are also using the city’s career and technology schools. That’s a model we’d like to see in the other schools. We think it’s a nice fit with what the employer wants and what the union is trying to build.” 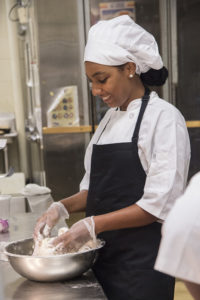 Courses for servers, cashiers, hosts, and dishwashers lasted for two to three days. The cooks had two weeks’ training.

“We see unionizing service-sector work, and specifically hospitality work, as key to ending poverty and racial and economic injustice in Philadelphia,” said Rosslyn Wuchinich, president of Local 274. “This program is an important example of how there can be a partnership between unions and employers.”

In Los Angeles, Unite Here and union hoteliers jointly train 1,200 hotel workers yearly, said Adine Forman, director of that city’s Hospitality Training Academy. “Hospitality is our most vibrant sector — 40 hotels are being built now,” she said. Hotel companies ask her to find and train workers. “We go to the churches, the YWCAs.”

It’s not inevitable that hotels become unionized, but it’s typical, with employer neutrality for elections, she said.

Khalil Yaacoub, operations manager for PCE’s restaurants at Philadelphia International Airport, said the partnership saved the company more than $100 per new employee. For example, PCE could spend $135 per employee for the ServSafe certificate, but Tuesday’s graduates will already be certified.

Yaacoub said 450 candidates applied for 90 jobs at Bar Symon, coming through CareerLink, the union, and Murrell Dobbins Career and Technical Education High School. Yaacoub chose the most qualified, and the union prescreened them for airport background checks. “Usually, it would have taken a few people to do this job — screening, interviewing, and filling out paperwork,” he said. 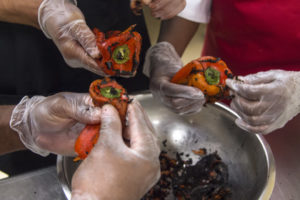 In North Philadelphia, jobs are the missing resource.

The idea, Unite Here program coordinator Ryan Nissim-Sabat said, is to “have a pipeline from the poorest neighborhoods to good union jobs.”

“The union has been great,” Damon said. “They know what’s current in the industry.” Her school, which offers culinary arts, is undergoing a $37 million renovation, so the program borrowed Strawberry Mansion High School’s kitchen.

What: Operates restaurants in 10 major airports, including Philadelphia. 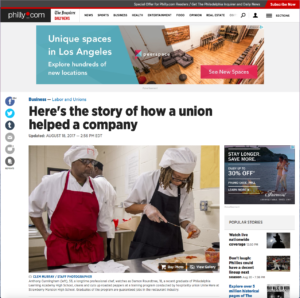