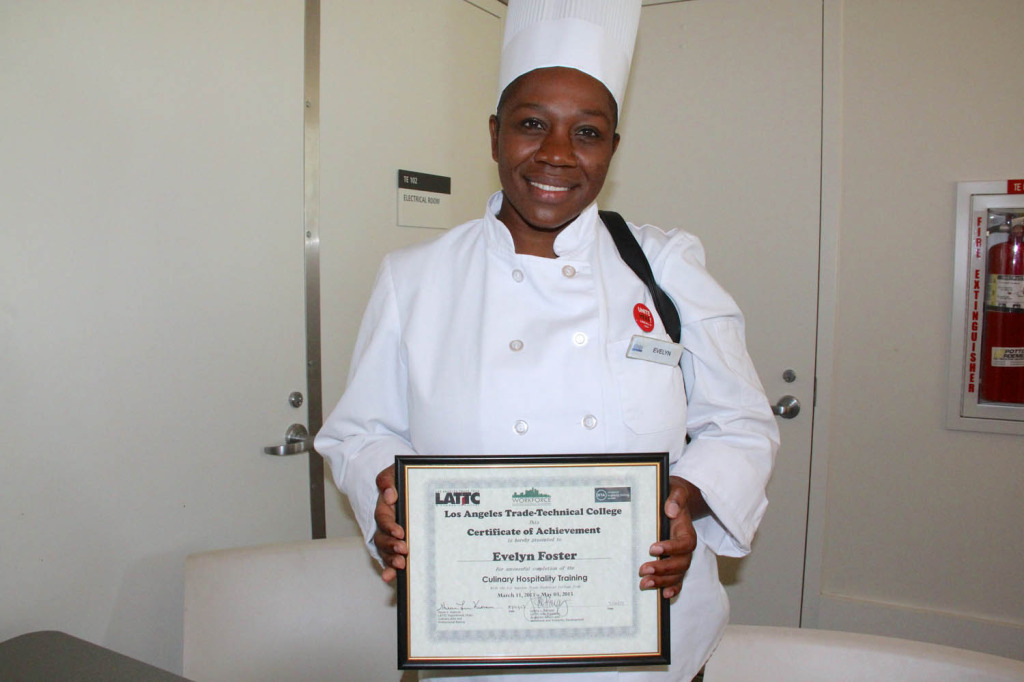 Evelyn was born in a small city called Puerto Barrios in Guatemala. Her mother moved to the United States when she was young and later sent for Evelyn to come live with her and attend school when she was 9 years old. Growing up in a single parent household, Evelyn learned at an early age that, although she may face many challenges in life, with dedication and hard work she could meet those challenges head on and accomplish her goals. With that in mind, Evelyn, who had always had a knack for baking and cooking – a passion that was instilled in her by her mother at an early age, set her sights on doing all in her power to one day become a chef. Toward that goal, she took a job at LAX where she worked in a bakery for nine years. However, her position was eliminated due to the LAX modernization that forced the closure of her restaurant. Dreaming of becoming a full fledged chef and of opening her own restaurant one day, Evelyn learned from her UNITE HERE Local 11 union representative about the Los Angeles Hospitality Training Academy (HTA) and an 8-week Culinary Training Program being funded by WIA Training dollars distributed to WorkSource Centers by the City of Los Angeles. Realizing immediately that this training would help her find new employment and advance toward her goal of becoming a chef while also giving her the opportunity to pursue a higher paying job in her career of choice and better provide for herself and her two children, Evelyn eagerly met with the Community Career Development (CCD) WorkSource Center, and applied for and was accepted into the program. The 320 hour culinary class, which was led by top instructors from Los Angeles Trade Technical College (LATTC) and the HTA, met five days a week, 8 hours a day. As part of the class, Evelyn learned about everything from knife handling to specialty cuts to how to execute various methods of cooking. At the same time, she developed skills and leadership qualities that she knew would take her to new heights in her career, including the importance of being part of a team and the ability to provide great customer service. Evelyn graduated the HTA’s culinary class in June 2013 and is now working as a culinary lead at HMS Host. But her journey is far from over, as Evelyn reports that taking this class has motivated her to go back to school and has sparked in her a renewed love for cooking far beyond what she already had. Accordingly, Evelyn has plans to continue her education and will be pursuing her AA Degree in Culinary from LATTC. She is also looking forward to using her skills and talents to open up her own Italian restaurant some time in the future.