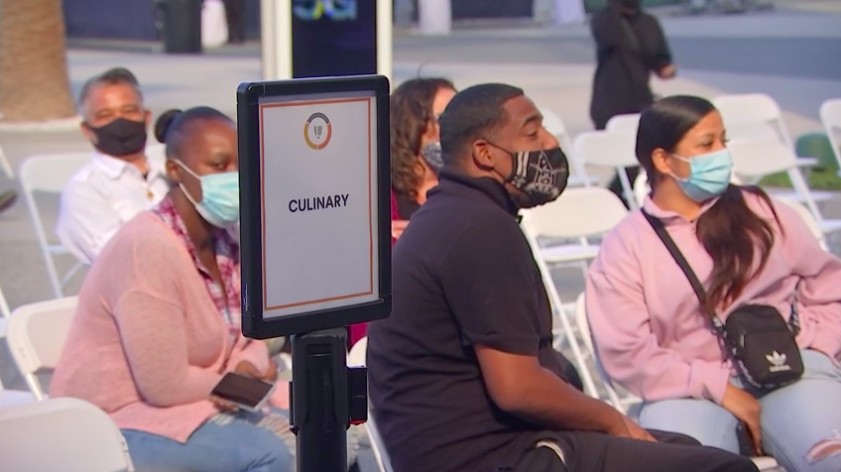 Veronica Perez was all smiles beneath her mask and red beret Tuesday afternoon. She made her her way through the hiring process at so-fi stadium.

Her enthusiasm, say job fair organizers, is definitely a plus.

“The pandemic,” she said. “I was laid off from my job. So, anything helps.”

She lost that job more than a year ago, she says, a food service position at LAX.

Making ends meet for her and her young children has not been easy.

She’s looking for a cashier gig or customer service.

“I’m looking for better opportunities and open my job skills,” she said.

There are more than 2,000 hospitality jobs up for grabs, says organizer Adine Forman. These are the folks who keep fans comfortable, fed and hydrated during games and concerts.

There are jobs as concession stand attendants, cooks, and suite runners, said Forman, the executive director of Hospitality Training Academy. ​There are warehouse jobs and 800 cook positions.

If you work four consecutive events in a row, you get a $150 signing bonus.

By midday, the line of hundreds had dwindled to a handful. Like other employers, this one is faced with some interesting challenges.

Although the numbers of people actively seeking employment have gone up in recent weeks, big companies, even prestigious ones, like so-fi stadium, still struggle to generate interest.

SoFi Stadium is looking to hire about 1,200 to 2,000 people for various jobs, including cooks, dishwashers, concession stand workers and more.

SoFi Stadium is looking to hire about 1,200 to 2,000 people for various jobs at the stadium.

INGLEWOOD, Calif. (KABC) — SoFi Stadium is looking to hire thousands from a two-day hiring fair being held this week.

The SoFi Hospitality Hiring Fair is coming at a time when many employers are having a hard time finding people to hire, so the stadium is sweetening the deal with a bonus after working four consecutive events.

People started lining up early morning on Tuesday for a chance to work at the new SoFi Stadium and it’s not just regular games they’d be working.

“Our goal is to make sure that the football games, the concerts, the Super Bowl, are fully staffed up,” said Adine Forman, executive director of the Hospitality Training Academy.

SoFi Stadium is looking to hire about 1,200 to 2,000 people for various jobs, including cooks, dishwashers, concession stand workers and more.

“I’m trying to improve on my cooking skills so this is going to be my first job as a cook,” said Diana Guillen, after she was hired as a cook at SoFi Stadium. “So I think this is really going to help me. It’s a good start for me, so I’m ready for it.”

During the job fair attendees go through the job application process, interviews and some are hired right on the spot.

“It feels really awesome knowing that being an L.A. native and that I am a part of some thing which is really big and special,” said Derrick Powell, who was hired.

The Hospitality Training Academy (HTA), in partnership with Unite Here Local 11, will be hosting a concessions JOB FAIR for SoFi Stadium.

If selected to move forward in the hiring process, you will complete an I9 and site-specific paperwork during the visit. Please be sure to bring proper documents to complete the I9 during the hiring event. 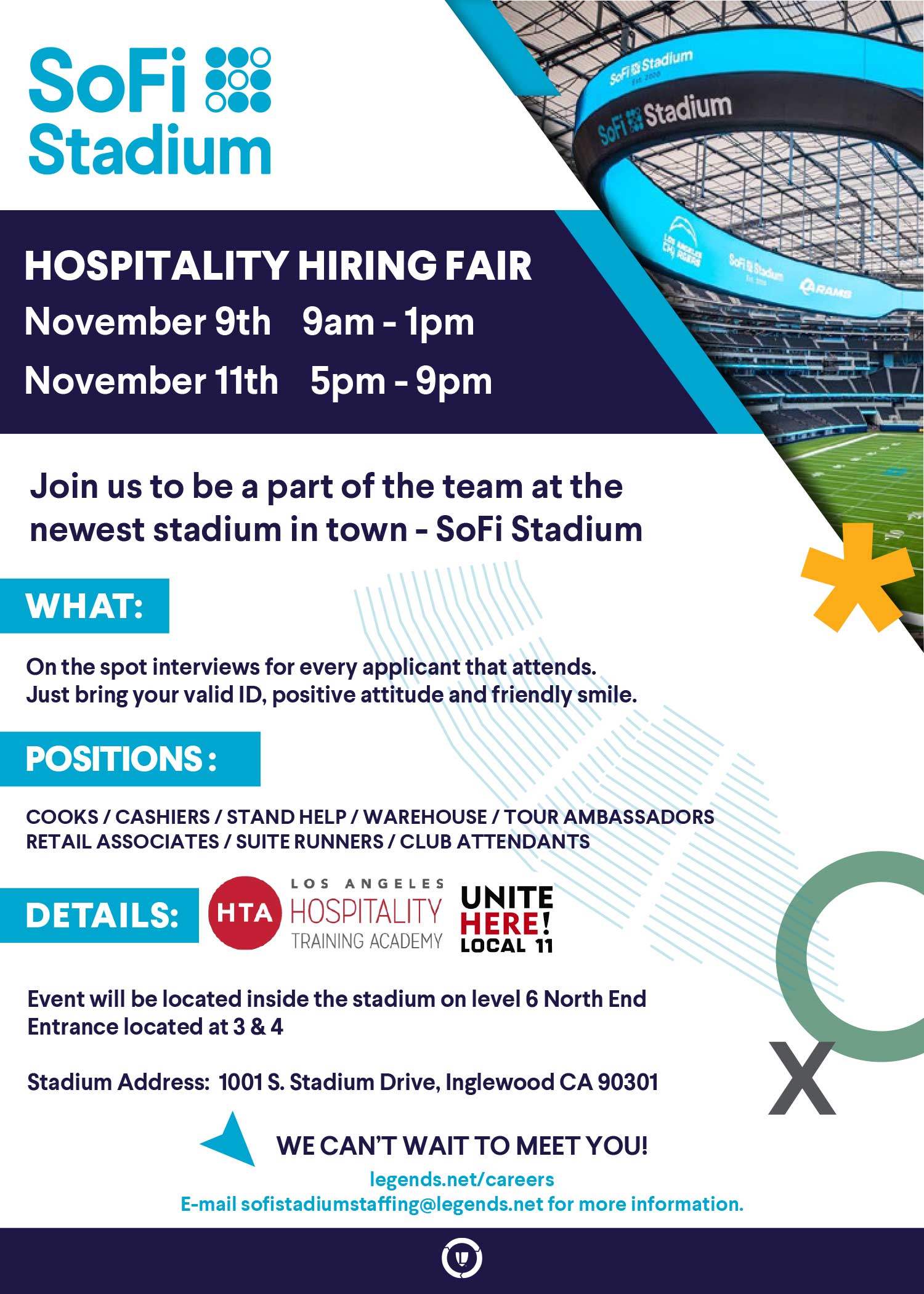 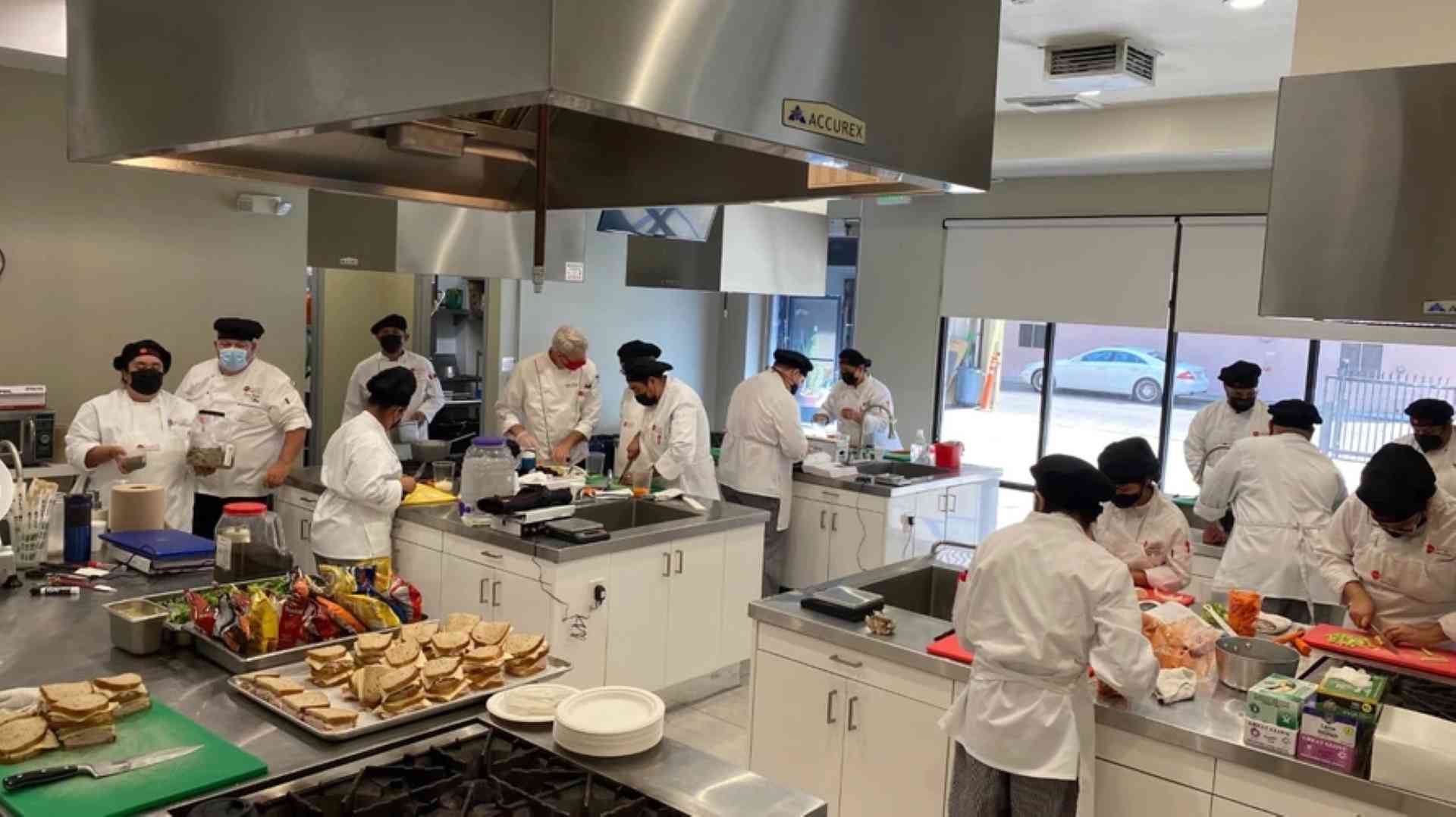 Trainees at the Hospitality Training Academy make meals for seniors, part of a Los Angeles-area program that is funded, in part, by the American Rescue Plan and the CARES Act.(Courtesy Adine Forman, HTA)

Two massive spending programs pushed through the U.S. Congress in response to the COVID-19 pandemic — the CARES Act (2020) and the American Rescue Plan (2021) — are being used by states and local governments to retrain workers for a post-pandemic job market.

The pandemic fueled the highest U.S. unemployment rate — 14.8% in April 2020 — since job data collection began in the United States in 1948. And for some of the unemployed, like those in hardest-hit industries such as leisure and hospitality, returning to their jobs isn’t an option.

There have been programs designed, utilizing the CARES Act money — the COVID money — to really put forth an effort to get individuals who have been impacted by COVID-19, in terms of employment and opportunity, to get training and retraining, or new training, so that they can be ready for different career paths,” says Darren Blackston, executive director of adult and continuing education at Delaware State University.

Delaware launched a job retraining initiative using $15 million the state received through the CARES Act. Blackston says retraining has focused on information systems, trades (any occupation that requires advanced training rather than a college degree) and health care.

“We have nursing assistant programs, we have medical billing and coding, we have lab,” Blackston says. “We have all of those things. If they wanted to get a nursing degree, then they have an opportunity to do that through our degree side of the program. So, whatever they’re looking for, we make sure that we’re able to provide that training.”

In Michigan, COVID-19 essential workers — everyone from health care providers and grocery stores workers to those delivering supplies or picking up trash — was offered free community college. The program was funded by the CARES Act.

“The pickup has been quick and enormous and has pretty fast effects, because these folks are now enrolled in community college,” says John Austin, director of the Michigan Economic Center. “And they’re going to be getting a skill that allows them to take the jobs that do exist, of which there’s a lot of demand for workers and employees in a lot of sectors. And so, it allows them to get equipped quickly.” 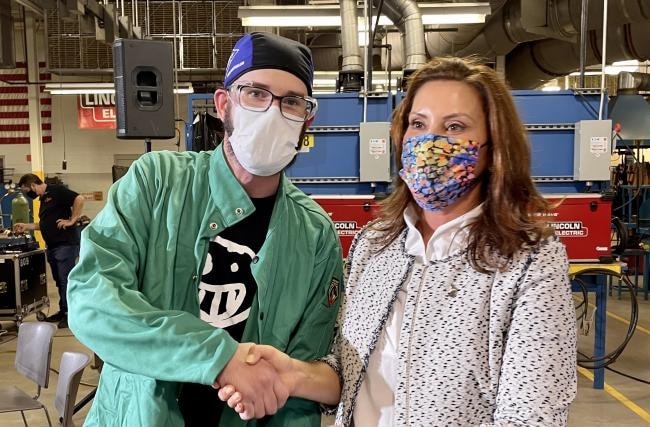 Austin says COVID relief dollars are being used to beef up an aging infrastructure in Michigan and the Midwest, including the lack of digital access. Training in the state also focuses on health care jobs, as well as information systems, but also new robot delivery services — some developed by automakers headquartered there.

“You’re going to need retraining. You’re going to need to learn how to program the computer versus perform a manual task. And so, we do see with this recession, just like after the Great Recession (2007-2009), that 99% of jobs that pay a decent wage required some form of post-secondary credential or training past high school,” says Austin. “And that’s the case with this pandemic-induced recession.”

Alhaghie Dampha got laid off from his chef job at a Los Angeles-area hotel after the pandemic hit but says a program funded by COVID relief money helped him get back on his feet.

“I got a call back to work,” Dampha says, “and get the opportunity to work on the senior meal program that we’re doing right now with the county of Los Angeles, where we provide almost 10,000 meals every week to senior citizens, people who are impacted by the pandemic, homeless, survivors of sexual harassment and trafficking.” 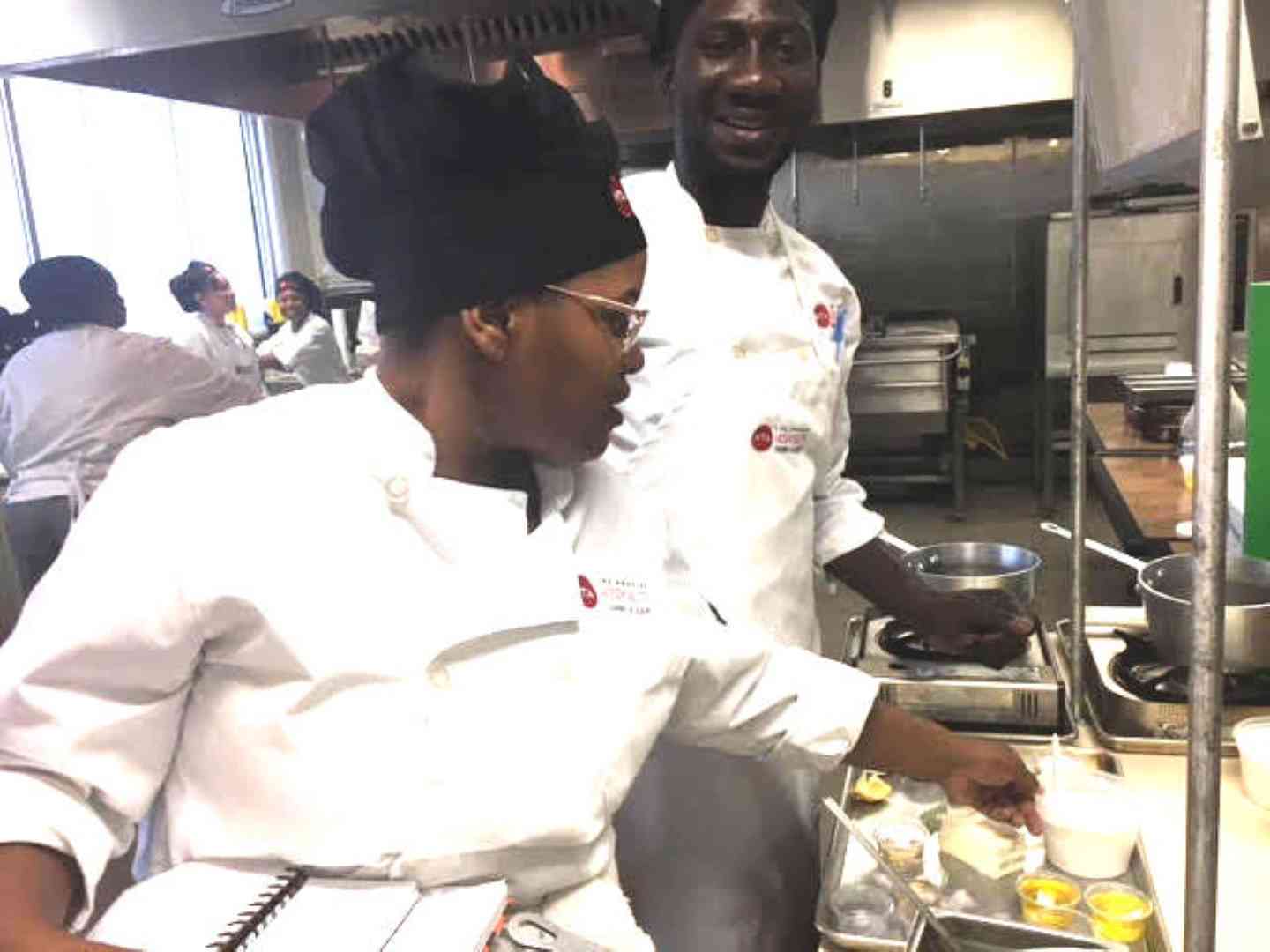 Dampha says the job opportunity was made possible thanks to a training program offered by Unite Here Local Eleven, the Food Service and Hospitality Workers Union. The senior food program keeps cooks and delivery people employed, hotel kitchens up and running, and provides healthy meals to seniors and other groups, according to Adine Forman, executive director of the union’s Hospitality Training Academy.

“As of now, we have received over $50 million in government funding to provide those services. And we have brought 1,100 workers back to work, and we have fed over 10,000 individuals since April of 2020,” Forman says, adding that funding comes from the American Rescue Plan, the CARES Act, and California’s state government. The money covers training tuition, transportation and child care.

Once the program is phased out, Forman says the academy will help transition trainees to other jobs, including those higher up in the hospitality industry.

“We’ve been able to give out almost $22 million to our students through that support,” says Chad Knights, vice president of NOVA’s Information and Engineering Technologies. 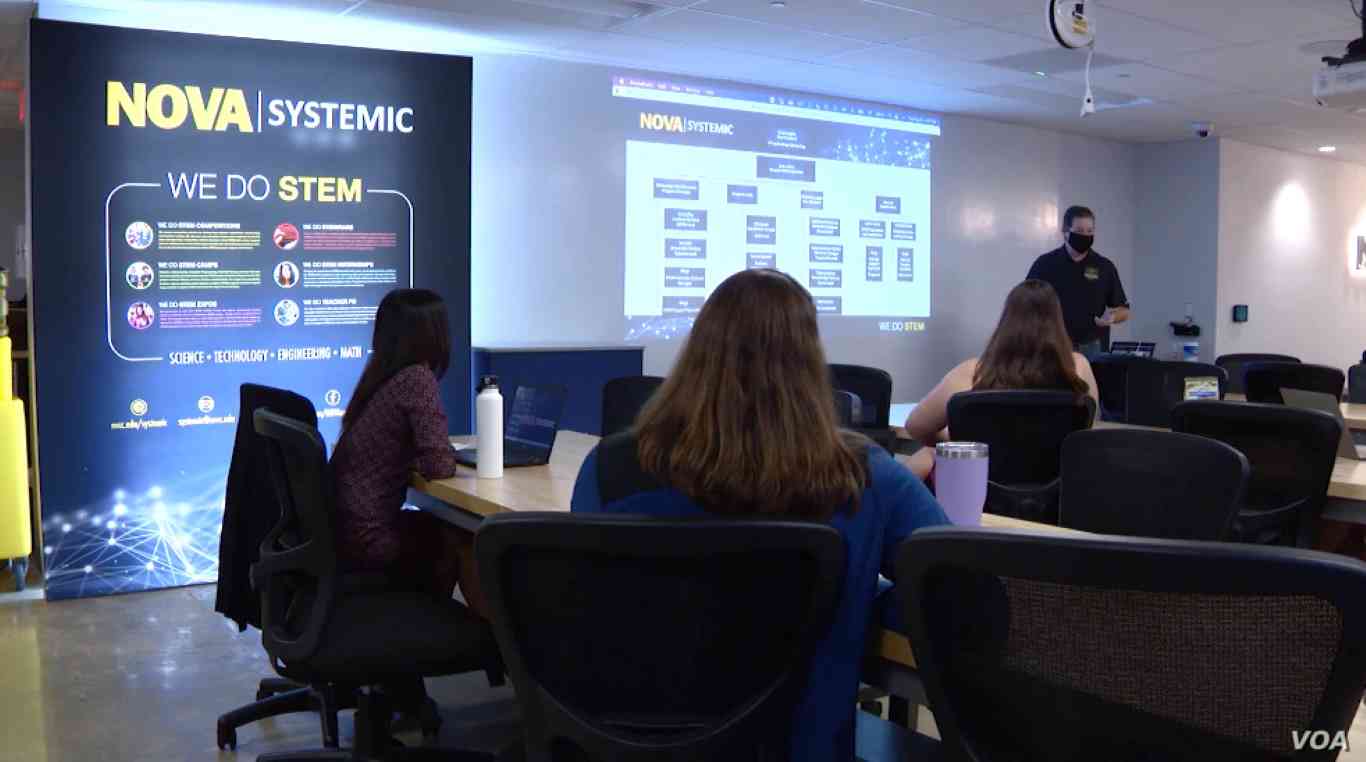 The school provides training in cloud computing technology and connects its students with industry partners in Northern Virginia, according to Knights.

“We’re having trouble keeping students in the program because really, the minute they make it through what is our certificate program, they are snatched up for internships and local positions,” he says.

The students train in engineering technology, learning to maintain computer servers, manage power distribution and network connectivity, which has become even more important with the increase in telework since the pandemic hit. Other students study software development and data analytics.

The ultimate goal of job retraining, says Blackston, is to place these workers in a solid position to weather future hardships.

“What COVID exposed was a lot of the inequities in our society, in terms of wealth disparity,” Blackston says. “And so, these jobs now across the board will help individuals really improve their stance, and with their families, be able to have a living wage, but (also) get some stability when we do have issues like COVID come up.”